The Democratic National Committee sends emails more frequently than any other candidate in my inbox, and their strategy overall is generally pretty solid.

Their emails are always relevant to current events, current races, and they’re often sent by the candidate of the hour – Beto O’Rourke, AOC, etc.

Today I’m going to look at some of their fundraising emails, because I’m a big fan. I received this email at 5.10pm EST on June 16th.

The email below is REALLY long, so apologies in advance for the scrolling.

Ok, let’s break this down.

The use of “re:” is interesting, because it implies that it’s an email reply and makes the recipient wonder if the DNC is responding to one of their own emails. It includes my name, and it refers to my supporter record, so it’s intriguing enough to warrant me opening the email.

Although the email is pretty long, the template they’ve used is great. It’s well designed, eye-catching & works perfectly for mobile.

The opening line is really clear – “We only need to flip four seats to take back the Senate”. It sounds simple and achievable. I’m not hugely happy that every candidate they’re endorsing in this email is a middle-aged man, but I mean, that’s a whole other battle.

However, the best part of this email comes below the fold:

I love this idea. It gamify’s the whole concept of donations – you want to ensure that next time you receive this email you’ll see different figures on your supporter record. It makes you more aware that they’re keeping a record of your donations, and you don’t want that record to be zero!!

This email in and of itself feels personal, it’s about my records, the subject line contains my name, and it calls me out again twice in the body when asking me to donate.

I have signed up to the DNC a couple of times using different email addresses, so I checked one of the other variations I got, and there’s another element of personalization that isn’t as obvious at first.

In a different version of this same DNC email, received on the same date, where I hadn’t provided my name. The donation CTA looked like this: 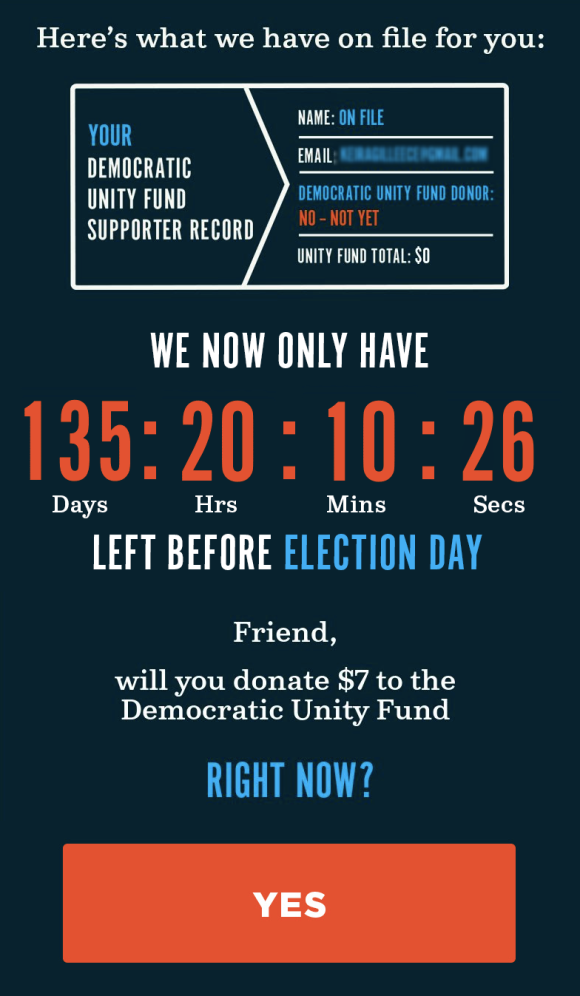 I really like this strategy – it indicates that their data probably tells them that personalized emails lead to higher donation amounts.

It also is a softer sell for someone who is newer to the DNC fundraising and might not be as likely to donate higher amounts.

On the whole, a great fundraising email.

Personalization: 10/10 – In case you hadn’t noticed, I LOVE the Supporter Record card with my details on it. The email also calls me out by name twice, and the suggested donation amount is tailored based on this.

Content: 7/10 – The email template is great, and the message is simple. We need to flip 4 seats to win the Senate. We need you to donate to make this happen. The design of the email is great, but I am taking marks off for the length.

CTA: 8/10 – There are seven CTA buttons within this email, but the entire template is hyperlinked so if you click anywhere you’re brought through to the donation page. There are varying donation amount buttons, which is a common tactic used in most political campaign emails. The CTA buttons are all placed at the bottom of the email, which is usually considered bad practice. However, in this case it’s probably not a bad idea to rely on those who made it to the end of the email, as they’re more likely to click thru and donate. I’d love to see if they’ve tested placing these buttons above the fold.

Donate: 10/10 – The entire objective of this email is to solicit a donation, and that’s clear throughout. The numerous CTA buttons make it easy to donate, and there are a number of different $ amounts suggested.